Written by Tom Deehan on Jan 6, 2016. Posted in On Location / Production News

Pride and Prejudice and Zombies filmed on location at Old Basing

The film adaptation of Seth Grahame-Smith’s novel Pride and Prejudice and Zombies was shot on location in the English village of Old Basing, roughly 40 miles south west of London. Old Basing was chosen as it features a variety of Victorian style architecture, perfect for productions wanting to recreate a period setting. 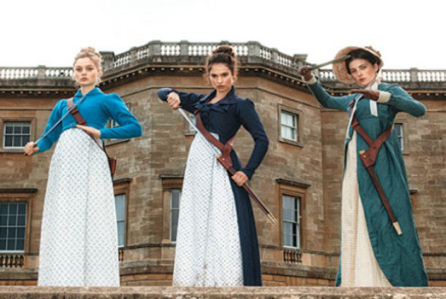 Grahame-Smith’s novel is a reimagining of Jane Austen’s classic literary text Pride and Prejudice, having the character’s fight off against a zombie apocalypse whilst dealing with the plot points of the original story.

The film’s writer and director, Burr Steers explains: “I used the Black Plague as a model and the people moving out to far, far country... but it really just exaggerates all the things that were in it as far as the female/male dynamics and class dynamics, the idea that you have this 1% that’s controlling everything while the rest of the country is in jeopardy. It’s really a British revolution that never happened.”

Actor Douglas Booth adds: “I’m just excited because it’s a new way of telling this sort of story... and seeing how these people try to survive in a world like this. Often zombie films are like, ‘run away, run away’, or one protagonist who’s got to get somewhere. There’s always running to or running from, whereas this is how people are living, and putting up with, and surviving.”

Very few productions have been drawn to Old Basing but this is expected to change after the film’s release date of February 5th 2016. Alternatively, productions have shot in other locations within the county of Hampshire, where Old Basing is located, such as Quantum of Solace which was shot on location at Winchester College.

The incentives programme for filming in the UK recently underwent a change, as productions of any budget can now have access to the 25% tax relief offered with the requirement that at least 10% of the overall budget be spent in the country.