Written by Tom Deehan on Feb 1, 2017. Posted in On Location / Production News

BBC One thriller, Trust Me now filming in Scotland

Jodie Whittaker’s upcoming BBC thriller, Trust Me has begun principal photography in Edinburgh and Glasgow. RED Production Company, whose credits include Ordinary Lies and Paranoid, are behind the new series.

Whittaker stars as Cath Hardacre, a skilled nurse who commits identity theft after being fired from her job. The show’s cast includes Emun Elliot, Sharon Small and Blake Harrison. 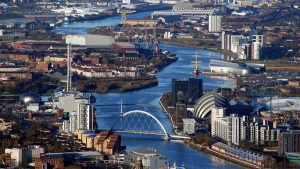 Writer, Dan Sefton explains: “having worked as a doctor within the NHS for most of my adult life, I know only too well that it provides the perfect setting for a contemporary drama - the characters, the (often literal) pain - as well as the affection and dedication of staff. Trust Me shows all of that but its central story is Cath, a decent, honourable woman who, when everything is falling apart, takes a huge risk in search of a better life. A life that she will fiercely protect.”

Nicola Shindler, Founder and Executive Producer of RED, adds: “this drama is about identity, lies and a woman’s desperation to escape the pain and disappointment of her old life. Dan’s exceptionally realistic scripts are layered with complex characters and a gripping storyline that will keep viewers hooked in this psychological thriller.”

Scotland houses some of the UK’s most popular filming locations among international and domestic productions alike. The BBC’s recent true crime drama, Rillington Place used Glasgow to double for an early 20th century London, while Marvel’s Avengers: Infinity War will begin filming throughout Scotland at the end of February.

Feature films and high-end television shows that film in the UK can access a 25% tax rebate on their incurred expenditure. Scotland’s Production Growth Fund provides an additional incentive that can be stacked with the national rebate.