Deer have run wild in Auckland in the new commercial from Australian beer brand Tooheys Extra Dry. Noctural Migration shows the animals enjoying house parties, clubbing, galloping through the streets and generally aping human ideas of a good time, before heading home to a stunning sunrise. 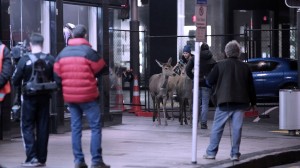 The deer were pets sourced from all over New Zealand and trained for five or six weeks before the shoot. Karen Sproul produced the spot for Exit Films: “We shot in the centre of the city in streets and bars, in suburban areas, in houses and out on a deer farm.

"We chose to shoot in Auckland because of the number of deer farms with available deer nearby, the great depth of skilled and experienced crew and many other necessary production resources.”

Filming in Auckland was aided by a good currency exchange rate, as well as the fact that Exit Films has an office there so a production service company wasn’t needed. The spot itself is set in a generic modern city. Shooting with the Arri Alexa camera was useful too as the team could film more footage, making it more likely that they’d catch the right moments with the deer.

We had to have a two-metre high fence completely surrounding wherever we were shooting the deer, to prevent them escaping and ensure their overall wellbeing.

Sproul added: “Shooting deer in the city and suburbs was a big challenge. We had to have a two-metre high fence completely surrounding wherever we were shooting the deer, to prevent them escaping and ensure their overall wellbeing. There are many challenges shooting with animals and making sure they are always calm and protected.”