Stockholm-based Folke Film set up a commercial stunt in Sweden’s Gothenburg Harbour with Volvo Trucks president Claes Nilsson. The piece demonstrates the strength of the Volvo’s tow hook by hanging the truck in the air from a crane and standing Nilsson on the bonnet. 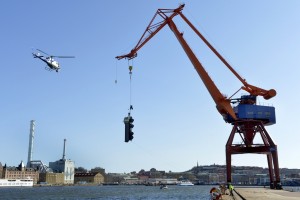 When Nilsson was lifted onto the truck, the production filmed him from a helicopter in a single shot using an Arri Alexa camera in a Cineflex stabilised housing.

“One take, wind, sun, sound, a tight timeframe, the Volvo Trucks CEO standing on a truck 20 metres above ground for two hours while we were hovering with the helicopter just next to him,” recalls director Filip Nilsson: “Except for some heavy wind gusts we had perfect conditions!”

Gothenburg was chosen because it’s the home of Volvo and offered the right visuals. They also needed a good crane company to hang the truck with absolute precision.

Volvo Trucks launched a similarly inventive spot in 2012 with a commercial that involved a perilous slackline stunt in Croatia.