Sam Worthington’s new film, the assassin thriller Hunter’s Prayer, is set to double Harrogate in North Yorkshire for the streets of Switzerland. Filming locations across Yorkshire in northern England will double for mainland Europe for the story of an assassin on the run. 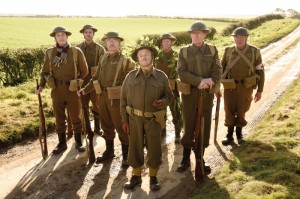 “The director (Jonathan Mostow) loves the location. They all love Harrogate,” Location Manager Matt Bowden told the Harrogate Advertiser: “Hopefully this will lead to more and more filming.”

Added Mike Newby, director of Visit Harrogate: “Yorkshire is fast becoming a leading location for filming and Harrogate can benefit from that.

"I can’t think of a better location that combines historic streets and rural areas. The filming itself does bring its own economic boost to the area.”

Sally Joynson, chief executive of Screen Yorkshire, commented to the outlet: “The real measure of success is the impact the production has in Yorkshire and filming makes a real impact on the Yorkshire economy. Every pound invested equals GBP 4 to GBP 5 for the local economy.”

Yorkshire is a popular filming location but it mainly hosts British productions. The recent Belfast-set drama ’71 was shot locally and a new movie adaptation of the classic British TV comedy series Dad’s Army (above) is in production now.

I can’t think of a better location that combines historic streets and rural areas. The filming itself does bring its own economic boost to the area.

Hunter’s Prayer is being supported by the Yorkshire Content Fund, which has GBP 15 million and is backed by the European Regional Development Fund.

“The Yorkshire Content Fund continues to have a dramatic impact on production levels in the region,” said Hugo Heppell, Head of Investments at Screen Yorkshire and an executive producer on Hunter’s Prayer, when the film was first announced. This latest investment is highly significant as it demonstrates that Yorkshire is now able to attract – and host – big-budget international feature films.”