New Pictures filmed the lavish period TV series Indian Summers on location in Penang, Malaysia, doubling the region for northern India. Set in 1932, the Channel 4 series tells a story of social drama during the dying days of the British Empire’s colonial rule. Indian Summers is set in Simla, a provincial capital in northern India at the foot of the Himalayas, but the production team chose the Malaysian island of Penang as their filming location for the six-month shoot. The production was serviced locally by Biscuit Films.

“Simla itself is now very modernised and built up, and the monsoon would have presented a problem [for filming],” said executive producer Charlie Pattinson.

“On literally the last day of my location scouting, having considered Sri Lanka and travelled around a lot of India, Singapore and Malaysia, I went up Penang Hill and breathed a sigh of relief. These properties were in a time warp: they absolutely summed up the idea of the British transporting their identity to a foreign land.”

Penang is on the west coast of Malaysia and is one of the most developed parts of the country. Capital Georgetown is Malaysia’s second-largest metropolitan area. The city has been a UNESCO World Heritage site since 2008 and so the locations used for Indian Summers needed few changes to recreate the 30s setting.

These properties were in a time warp: they absolutely summed up the idea of the British transporting their identity to a foreign land.

Buildings outside the capital required a lot more work as many of them had been reclaimed by the jungle.

“I’d worked in India quite a lot in the past,” explains production designer Rob Harris, “and looked at a lot of pictures from the Raj and at the geography of Simla, collecting pictorial points of reference. 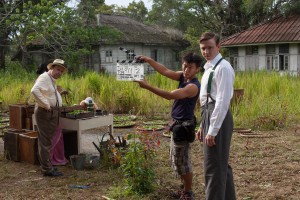 “We had to relay all the lawns at Chotipool (a residence in the story) to restore it to its English country garden glory and the Crag Hotel had been derelict ever since Indochine (a 1992 film starring Catherine Deneuve) was shot there.

"The reclamation took three months, but bringing these places back to life and making them habitable was really enjoyable.”

Getting to the hilltop locations was a major challenge for the production team. A single-track road and a funicular railway were the only access routes by which to transport equipment and supplies, and everything was made more difficult by the punishing Malaysian heat.

Malaysia is becoming more popular as an international filming location. The country offers a 30% production incentive and Pinewood Studios now has a facility in Johor near the southern border with Singapore. Netflix drama series Marco Polo was the first major production to use the site as a filming location and production base.