Written by Shona Smith on Apr 29, 2019. Posted in General Interest / On Location

The eighty-minute long episode depicting the battle of Winterfell was the most extensive showdown the fantasy-action series has ever staged. Cast and crew spent eleven weeks filming night shoots for the episode in 2018. Shooting on location in Northern Ireland, coping with the elements added to the intensity of the shoot, which became known as “The Long Night” by those involved. 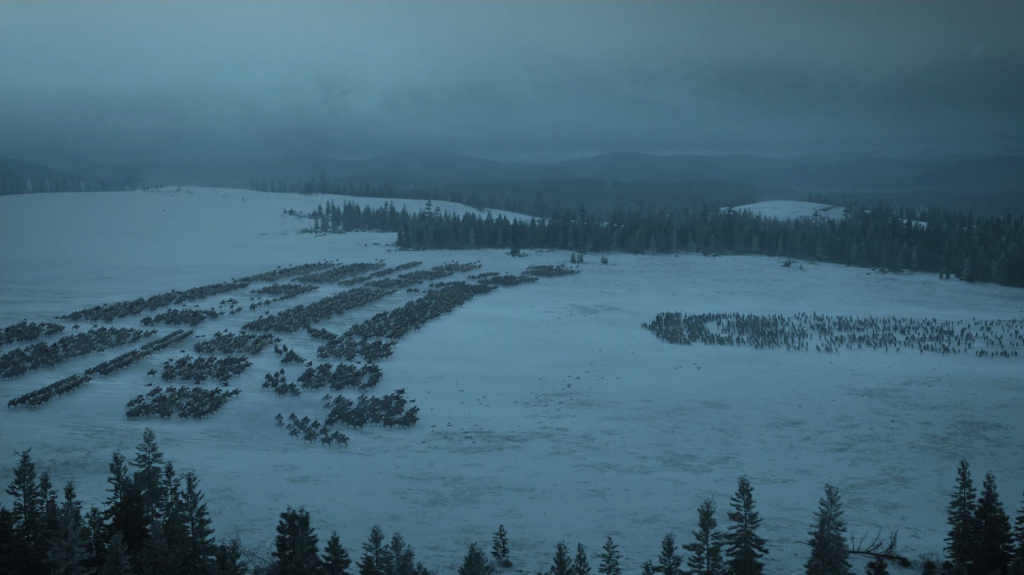 An expanded set was built at the existing filming location for Winterfell. Additional rooms, tunnels and corners provided expanded space for the epic battle scenes which involved twenty key cast members. Jacob Anderson, who plays Greyworm noted that the expanded set was “really immersive. Especially when there is haze and snow and people running around, you can get genuinely lost”.

Consisting of fifty-five consecutive night shoots, various sites in the rural County Atrim were called upon for on location filming . Maghermorne Quarry, a noted Game of Thrones location that has provided the setting for Castle Black and a Wilding village of Hardhome in the past, was one such setting. Belfast’s Paint Hall studios also provided production facilities for day shoots. 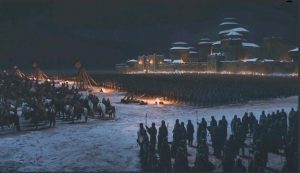 Episode director Miguel Sapochnik explained why such a demanding schedule was necessary to Entertainment Weekly, detailing that the production “originally thought, “We’ll film this part here and this part there,’ and basically broke it down into so many pieces it would be shot like a Marvel movie, with never any flow or improvisation,” a technique used for most large-scale action sequences by major studios. However, he states, “I turned to the producers and said, ‘I don’t want to do 11 weeks of night shoots and no one else does. But if we don’t, we’re going to lose what makes Game of Thrones cool and that is that it feels real”. The showrunners backed Sapochnik’s vision for the episode, and rather than assembling the eighty-minute instalment in post-production, a comprehensive on location shoot took place.

Despite being only six episodes long, the eighth and final series is the most expensive to date. According to Variety, each episode will cost over GBP11.2 million. While talent fees contribute to this, the production has evidently gone to great lengths to meet audiences’ high expectations.

Incoming productions to Northern Ireland benefit from the UK High-End TV Tax Relief, offering a 25% tax rebate on projects with a minimum core expenditure of GBP1 million per broadcast hour. In addition, Northern Ireland Screen has a fund available to feature film and TV that provides up to 25% of local spend.