New industry action to tackle bullying, harassment and racism in the workplace provides resources to employees, freelancers and employers. For employers the BFI and BAFTA provide a new Action List for the film and television industry. The Film and TV Charity have also launched a suite of bullying support services for immediate support to employees and freelancers. Further steps such as the BFI hiring the first Production Inclusion Manager to advise productions are also underway. 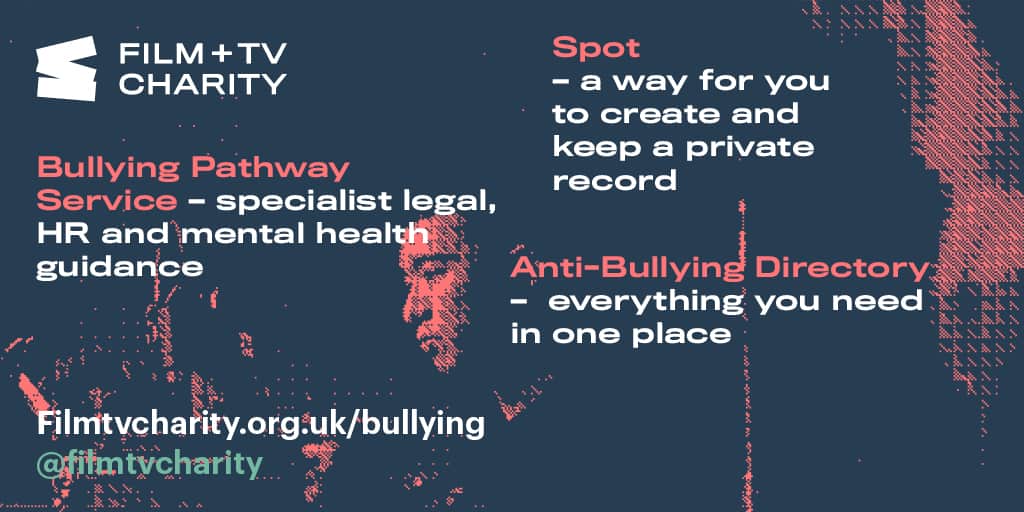 The practical employer Action list is backed by over 40 organisations across film, games and television including new endorsement from the Casting Directors Guild, Coalition for Change and talent agencies. The list is part of a wider industry mobilisation and call for employers to commit to following the latest advice to meet their legal and ethical responsibilities and signpost workers to available support. It includes a set of resources designed to assist employers to meet those responsibilities.

Tim Hunter, Director of Learning, Policy and Inclusion at BAFTA, said “The nature of our industries can make it more challenging to put in place policies and procedures which might be more achievable in other sectors. The Action List and accompanying training and resources suggest solutions for the kinds of workplaces common in the industries which we will continue to improve in the coming years. It’s so important that so many industry bodies are coming together with a united strategy to tackle this issue supporting both employers via the Action List, and workers via the fantastic services offered by The Film and TV Charity. Our shared aim is to create workplace cultures where everyone can contribute to the best of their abilities.”

The State of Play survey on unscripted TV undertaken in the wake of the pandemic and published in January 2021 by Bectu, Bournemouth University and Viva La PD, found that over 93% of respondents have experienced bullying or harassment in the TV industry, with only 11% who reported incidents considering that the matter was satisfactorily resolved. The report suggests that the vulnerability of the workforce over the last year has spotlighted a whole range of systemic employment-related concerns, including the need to ensure that incidents can be reported without fear of reprisal, and that procedures are in place to address reports.

The Action List is based on the Set of Principles and Guidance published in 2018 in response to the systemic issues around bullying and harassment exposed through cases such as the Harvey Weinstein allegations. In July 2020 the Principles and Guidance were updated with a specific commitment to anti-racism in recognition of widespread failings highlighted by the Black Lives Matter movement.

Key points for employers in the Action List include being aware of their responsibilities under employment law, and note that the industry must get better at formalising the process. Employers should do the groundwork by ensure you have a policy and procedure in place and taking part in ScreenSkills’ training which helps identify bullying and harassment. Projects can show commitment to the kind of work environment by making sure everyone knows where to finds your policy and procedure, how to access further support such as The Film and TV Charity’s Bullying Pathway Service and ensure that the Film and TV Support Line number (0800 054 0000) is included on call sheets and prominently displayed. It also recommends that two designated individuals are available to the team who can advise about the process for dealing with reports of bullying and harassment. The Action Lists for Film and Television and Games as well as the Principles, Guidance and Dignity at Work template are all available to download.

Faye Ward and Hannah Farrell, Creative Directors of Fable Pictures (Rocks, Stan & Ollie, Anne Boleyn), endorse the list, saying “Fable Pictures strive to offer an inclusive environment on all our productions where everyone is treated with dignity and respect. The Principles against bullying, harassment and racism have really helped us set the tone on set and create a welcoming and inclusive working environment. This new Action List has made it even easier for us to understand what steps we can take to prevent and deal with unacceptable behaviour and support all our employees.”

Also announced today, The Film and TV Charity has today launched new bullying support services to provide immediate support developed in direct response to research published in February 2020, that shows 84% had experienced or witnessed bullying harassment, with even higher figures in some sub-sectors. Lucy Tallon, Head of Mental Health and Wellbeing at The Film and TV Charity, said "our research identified bullying as one of the leading causes of poor mental health in our industry. The personal testimonies we heard and continued to hear are shocking. We must do better as an industry.  The Film and TV Charity is launching a suite of services to help those experiencing or witnessing bullying navigate their options. Individuals can come to us for self-help resources, for professional advice, and for access to a safe digital space to record experiences in private. These services are part of our strategy to make sure everyone working in film and TV has better support and better mental health.”

Finally, the BFI has hired Morgana Melvin as the first Production Inclusion manager to work across the BFI Film Fund, Inclusion and Skills teams and other partners such as ScreenSkills, BBC Films, and Film4 to identify the challenges and coordinate strategies that can result in real change for employment opportunities for underrepresented groups in the production sector across the UK. By reaching out to producers, Head of Departments and the wider industry, Morgana will work with BFI teams on strategies that can support job progression and retention in the industry. This will include support for the prevention of bullying, harassment and racism on set.