Poldark is based on novels by Winston Graham and the miniseries will in fact be a remake of a previous 70s adaptation. The story is set in 18th Century Cornwall and follows Ross Poldark’s attempts to set up a tin mining empire.

Bristol is increasingly popular as a filming location for UK-based productions. While Company Pictures based New Worlds locally, the BBC has regularly doubled the city for London for dramas such as Doctor Who and Sherlock.

Doctor Who is based at Roath Lock in nearby Cardiff and the BBC is also working with Urban Myth Films on the fantasy drama series Atlantis, which films mainly at a retrofitted studio facility in Chepstow. 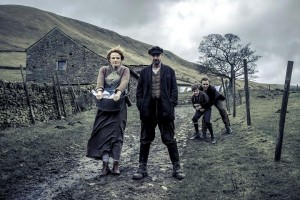 Wales has been attracting international feature films for many years and high-end US fantasy drama Da Vinci’s Demons is based in the Swansea region in the south of the country, doubling the countryside for Renaissance Italy.

Period drama productions are prevalent across the UK. In addition to its work in the south-west, the BBC has also started shooting a second series of social drama The Village, which films on location further north in Derbyshire and is set in the early 1920s. The BBC is also responsible for gangster drama Peaky Blinders, which is set in a similar time period and is based in Leeds.

The UK’s TV tax credit has made domestic shoots more financially viable for UK-based production companies that in the past would have had to consider filming in locations such as Eastern Europe.

Update (15 April 2014):
Poldark will be based at The Bottle Yard Studios in Bristol for the next few months.

Commented Producer Eliza Mellor: “We chose The Bottle Yard Studios as they have great spaces for our set builds, give us outstanding access to Cornwall where we film over the summer and are increasingly a thriving production centre which makes it a really good base for the Poldark team.”