Homeland starts filming in Germany with funding support from Medienboard

Terrorism drama Homeland has started filming its fifth season on location in Germany. Producers are using Studio Babelsberg near Berlin as a base and is getting a million euros in support from Medienboard Berlin-Brandenburg. 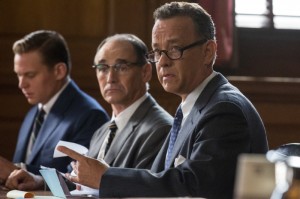 “We are all addicted fans and very proud to be home to Homeland for the next season,” said Kirsten Niehuus, head of Medienboard.

“After a long history of producing outstanding national and international feature films the capital region is more than ready to go to series.”

Homeland was based in North Carolina for its first three seasons, but relocated to South Africa shortly before North Carolina sharply downgraded its state filming incentive. Cape Town doubled for various Middle Eastern locations and also the Pakistani capital Islamabad.

The drama will be the first American TV series to film an entire season on location in Germany.

Studio Babelsberg is situated in Potsdam just outside Berlin and has recently been a base for the remake of 90s surfer drama Point Break. Last autumn the studio also hosted Steven Spielberg’s Cold War drama Bridge of Spies (above), which is the filmmaker’s latest collaboration with Tom Hanks.

The studio was also involved with Wes Anderson’s The Grand Budapest Hotel, which created its central location in the town of Görlitz on the border between Germany and Poland.

“The tradition of filmmaking, the excellent handcraft and the various filming locations are important driving forces, why directors want to film in Germany,” said Carl Woebcken, chief executive officer of Studio Babelsberg, in response to The Grand Budapest Hotel’s subsequent Oscar success.