Location filming was rejected in favour of Fox Studios’ Los Angeles back lot for a new spot for Sony’s Xperia Ion smart phone. One Block features a man plugging into his Xperia and moving through a series of entertainment genres in the street as he walks back to his apartment. 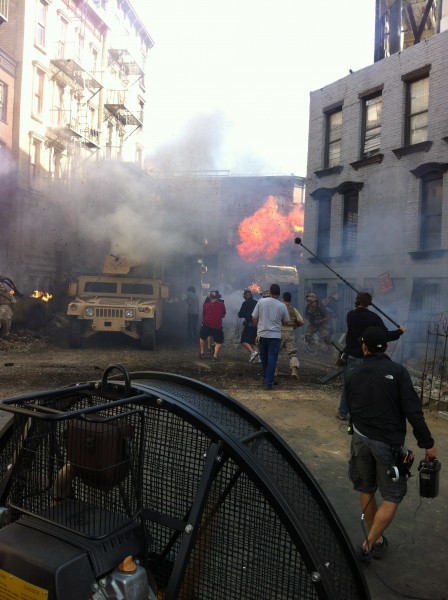 The production team originally planned to film at least partially on location on a real street, but practical issues like the extent of the in-camera special effects work meant a back lot was the best option.

Greg Lotus was an Executive Producer for McCann New York: “We did consider shooting one day on a lot and one day at an actual street location but the cost to have control of an actual street proved to be too much and not logistically reasonable.”

A lot of time was spent choreographing the camera moves as the action segues from a rock concert to a robbery thwarted by Spider-Man, to an explosive urban war zone featuring soldiers rappelling down the side of an apartment block. While the back lot offered complete control of the environment, it was more of a challenge to make it look like a real street location.

Ali Brown produced the spot for Prettybird: “It proved very difficult - not to find the locations we liked [in the ‘real’ world], but [to find locations] that we could start fires in, set off cannons, repel from buildings, stage a concert on a moving truck with hundreds of extras and so on. It was the level of control and permission that we needed that ultimately led us to the back lot which offered all of that."

You aren't benefitting from the innate textures and details that you get in the ‘real’ world - you have to create those.

Brown adds: “The biggest challenge is always to make it look like a real street, which puts a greater onus on the art department. You aren't benefitting from the innate textures and details that you get in the ‘real’ world - you have to create those.”

Studio facilities are playing a major role in keeping Los Angeles’ filming industries nationally competitive in the US. Over the past year the majority of US multi-camera TV comedy pilots have filmed in Los Angeles studios, while there's been a huge increase in the number of productions seeking better location filming incentive deals outside California.