Dutch production company Wefilm travelled to Poland and the Philippines to film the latest entries in Wieden+Kennedy’s Dropped digital campaign for Heineken. The Poland episodes involved skydiving with clowns and the team stranded itself on a desert island in the Philippines.

For the Polish-German episodes, the team chose South African graphic designer Clint Jacobs and challenged him to put on a circus act in Berlin via a parachute jump with a group of skydiving clowns. 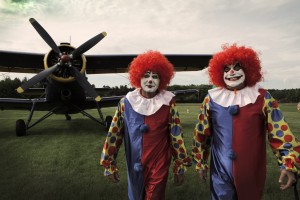 “We chose Poland because we were looking for an unexpected location that wasn’t used that much before in global campaigns, which had a central location in Europe and a good film infrastructure,” explains Wieden+Kennedy’s Head of Production, Erik Verheijen.

Warmer and more exotic locales featured in the campaign’s next Dropped destination in the Philippines. Irishman Murray Aston and Pole Jakub were handcuffed together on a desert island and challenged to find the key.

The production team based themselves at the resort island of El Nido in the western Philippines and spent a week scouting for a suitable island on which to strand their two travellers. What they discovered was that the locals had actually renamed many of the islands for the reality TV shows that had already filmed on them so they focussed on finding a location that hadn’t been shot before.

The plane broke and had to be fixed with the battery of a boat. It rained continuously and it became a huge challenge to keep our equipment going with all the mud, sand and rain!

“A lot of foreign crews who are filming at the Philippine islands stay at resorts or travel back by speedboat to the mainland after a shooting day,” says Wefilm producer Tobias Wilbrink: “We decided to stay on the island with the contestants to have the same experience. This was both fun (waking up at a beach hut bathing in the sea) and exhausting [as we were spending] 24 hours a day with our subjects on a single island.”

Weather proved a challenge as the team was rained on constantly in conditions that restricted sailing and affected food deliveries. The seaplane that Murray and Jakub hailed to travel to the next island also had its problems.

“We were caught in a typhoon and sailing became too dangerous and therefore the island could not receive any supplies,” Verheijen adds: “The plane broke and had to be fixed with the battery of a boat. It rained continuously and it became a huge challenge to keep our equipment going with all the mud, sand and rain!”

Servicing was provided locally by It’s A Wrap Production Service in Berlin and Philippine Film Studios in Manila.

To see all the Poland Dropped episodes click here.

Follow the links to find out about Heineken's previous Dropped episodes in Alaska, Cambodia and Morocco.