Smuggler filmed on location in north-west Spain to stage a chase between charging bulls and a Volvo truck in a new stunt commercial for the brand. The tightly-organised operation was filmed using 28 different cameras and showcases Volvo Trucks’ precision control. 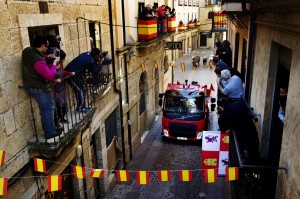 Filming took place in the Spanish town of Ciudad Rodrigo, where the streets offered the space and corner angles that made filming feasible and support was on offer from the local Mayor. The shoot was serviced locally by Goodgate Productions.

“The most important part was that this wasn’t set up as a regular Bull Run,” explains Alexander Blidner of agency Forsman & Bodenfors: “Sure, we took inspiration from that world but we needed to be completely certain that we could secure the safety of the bulls during the chase scenes. Ciudad Rodrigo provided the perfect circumstances in terms of how we could secure the route itself, but also the handling of the bulls.”

Precision driver Rob Hunt took the wheel of the truck for the shoot. He had to speed through the narrow streets at 30 kilometres per hour in order to stay ahead of the running bulls.

“The biggest risk was that we were in a town,” Hunt observes: “It was live and we had to make sure that it was safe for both people and animals. With the big rear mirrors I had a good view of the bulls and the bull runners behind me so I could keep a good safe distance.”

Director Henry Alex Rubin and his team spent several days planning the best angles from which to film the action.

Ciudad Rodrigo provided the perfect circumstances in terms of how we could secure the route itself, but also the handling of the bulls.

The most exotic pieces of equipment were a mobile octocopter that filmed from the air and a 360-degree ‘Hex’ camera that was secured to the back of the truck as Hunt navigated the streets of Ciudad Rodrigo. This spherical digital camera worked by filming simultaneously through six lenses and then the footage was digitally ‘stitched’ afterwards to create the 360-degree image.

“Basically what we did was find a perfect location for the rig,” Blidner adds: “The brief being that we wanted as much visibility both to the front and the rear as possible. At the same time we didn’t want to be too far from the action. In the end we decided that on top of the cab was the only option.”

Volvo Trucks has filmed two other ‘stunt’ commercials on location in Spain in recent months, each one spotlighting a different feature of its vehicles. Technician demonstrated the trucks’ high clearance by driving (safely) over a Volvo employee’s head and The Hamster Stunt involved a hamster steering a truck out of a quarry using the truck’s sensitive steering.

The Sweden-based brand also showcased the strength of the trucks’ tow hook by hanging a vehicle over the water at Gothenburg Harbour.

To see the 360-degree version of The Chase click here.