Production company MJZ filmed in the suburbs around Old Trafford to mark Chevrolet’s sponsorship of Manchester United’s match-shirt. The new spot charts the history of the shirt design from the club’s early days, as fans march through the streets. 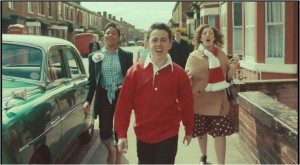 “All scenes were filmed in and around Manchester, and were selected to be representative of the era being reflected by the Manchester United shirts celebrated throughout the spot,” explains Nicole Dowswell of agency Commonwealth//McCann.

“The locations were picked based on authenticity and accuracy of the era of focus. Very little was done to alter the scenes. It was important to be as authentic to the era as possible – mostly just dressing and props.”

Commercials featuring current sports heroes are frequently built around the availability of the stars themselves. Production teams routinely have a matter of hours to film the relevant scenes and travel to the talent, rather than the other way round. 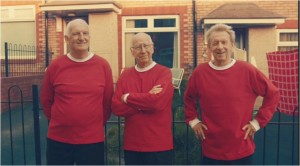 Telecoms company Claro recently built a World Cup commercial around the expectations for Brazil’s star striker Neymar. Although largely filmed in Brazil, the shoot involved a trip to Spain to film a key sequence at the player’s home ground at Barcelona FC, a pattern that has become relatively common in the modern commercials industry.

Earlier this year, Moonlighting built a Windhoek Lager commercial around Galatasary SK star Didier Drogba in Turkey by doubling Istanbul for parts of Africa. Once again, the move was a response to the player’s limited availability.

Sometimes the locations and style of filming can still make more of an impression than a multitude of footballers making fleeting cameos. Production company Gorgeous demonstrated just that with their commercial for EA Sports FIFA 14 by marrying a dynamic idea with an eye-catching Spanish vista.