Written by Shona Smith on Sep 7, 2020. Posted in On Location 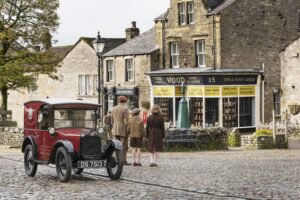 Grassington, a historic market town in North Yorkshire was transformed into "Darrowby Village" for 1930's-set veterinarian drama All Creatures Great and Small. Much of the action takes place in Grassington and in the surrounding Yorkshire Dales. 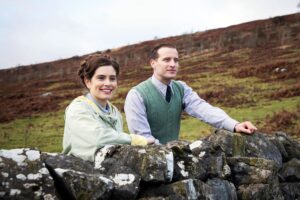 The series is a reboot of 1980's family drama based on books of the same name. Nicolas Ralph is in the iconic lead role of James Herriot, a vet who became renowned for compassion, humour and love of life. Samuel West, (Mr. Selfridge, On Chesil Beach) takes on the role of vetinary surgeon and practice owner Siegfried Farnon. Mrs Hall, resident housekeeper and matriarch is played by Anna Madely (The Child in Time, Patrick Melrose). Callum Woodhouse (The Durrells) and Rachel Shenton (Switched at Birth, White Gold) and Dame Diana Rigg (Victoria, Game of Thrones) also star. 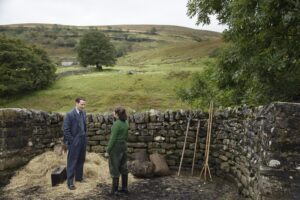 Six-episodes and a Christmas special explored various locations in Yorkshire. Location manager Gary Barnes commented to Screen Yorkshire, “as a Yorkshireman the show gave me the perfect opportunity to show off my home county. Filming in stunningly beautiful landscapes and working with such friendly, welcoming people across the Yorkshire Dales was an absolute joy. Screen Yorkshire were there from the start and worked with us every step of the way. Wherever we went, we discovered how much love there is for Herriot’s story, it’s been a pleasure to bring this to the screen - you’re in for a treat!”. 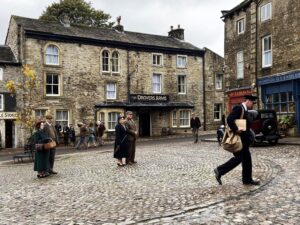 Jackie Smith, production designer added “The majestic beauty of the Dales provides rich pickings for location scouts, with Yorkshire’s literary history evident at every turn. Yorkshire is distinct from other regions because of the diversity it offers. The architecture of its gritty urban textile towns contrast with the grandeur of its stately homes and mansions”.

The first episode of All Creatures Great and Small drew in 3.3 million viewers making it Channel 5's biggest audience since the return of X-Files in 2016. Prior to airing the series was already commissioned for a second season.

Playground Television co-produced the series with PBS’s Masterpiece. Screen Yorkshire was involved in bringing the story to the screen by providing funding and film office support. 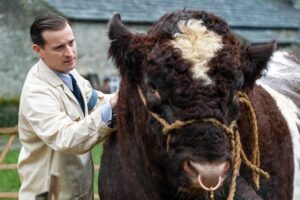 Screen Yorkshire champions the film, TV, games and digital industries in Yorkshire and Humber and invests financially in productions in order to develop talent to create a skilled workforce and foster Yorkshire’s global reputation. Recent supported productions include Hope Gap, and The Duke.  In May, an Indie TV and Film Development Fund totalling £200,000 was set up and will distribute awards of between £2,500 and £25,000, to help independent TV and film production companies to develop new content.